Northern Nigerian Governors, upon the invitation of the United States Institute for Peace (USIP), met for three days in Washington DC.

The symposium was attended by the governors of Adamawa, Borno, Bauchi, Sokoto, Niger, Taraba, Kwara, Zamfara, Plateau, and Deputy Governor of Kano. 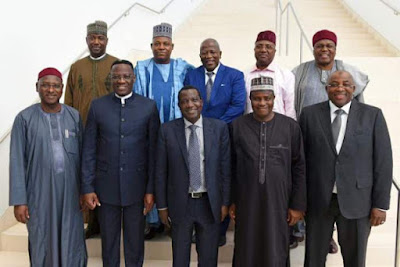 The governors were led by the Chairman of the Northern Nigerian Forum, Governor Shettima of Borno State, and they met with Senior US government officials, including US Secretary of State, John Kerry and Head of USAID, Condoleezza Rice.

The meeting was declared open by Deputy Secretary Anthony Blinkey, who emphasized the
importance of local leadership and local solutions to national challenges. He charged the governors to work closely with President Buhari. According to him, Nigeria is not just important to West Africa but the world, and he promised that the Government of the United States would continue to partner with and support Nigeria. He called on the governors to partner with necessary stakeholders, in particular the civil society, and to harness Nigeria’s youth bulge positively. According to him ‘Nigeria can grow only when the states grow’. 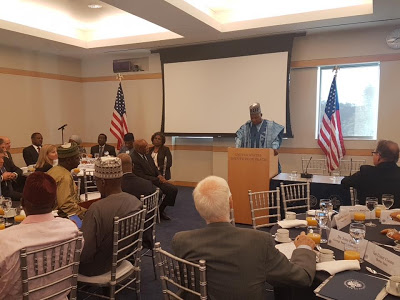 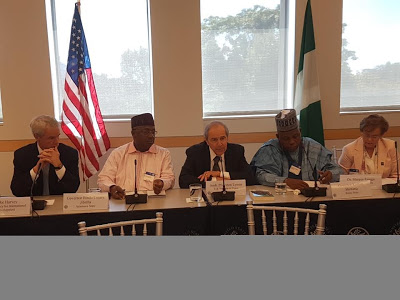 In a very fruitful meeting, the governors had the opportunity to place a wish list before Secretary Kerry. At the top of the list was education, in particular education for the girl child, as well as agriculture, healthcare and electricity. They also had the opportunity to meet National Security Adviser to President Obama;Head of USAID, Condoleezza Rice; and businesses in the US. My only hope is that the governors commence immediate follow up on all the promises.

Aside from the special meeting, the members of the Senior Working Group - a group of twelve set up by the USIP comprising Nigerian elder statesmen and women - had the opportunity to interact with the governors. During the meeting, the governors demonstrated significant levels of commitment to the development of their states,Northern Nigeria and Nigeria as well. I only hope this is matched with political will.

The governors identified poverty as the main unifier in the North. Therefore they all agreed that there is an urgent need to lift the North out of endemic poverty, which is also the driving force behind the incessant conflicts in the region. While violent conflict is prevalent in the majority of the states, conflict dynamics vary from state to state. They linked the conflicts to perceived marginalisation, alarming inequality, unemployment and low literacy rates.

Improving access and quality of education dominated the discussion throughout the three-day meeting. One of the identified challenges was the over 10.5 million children out of school, a number the governors believed to have increased by at least another million with the BokoHaram insurgency in the North East. According to the governors, if nothing is done immediately to improve enrollment and retention in schools, the prospects for the region over the next ten years will be bleak.

The governors agree that all the states are working assiduously to ensure the girl child is at the top of their agendas.According to them “unless girl child education is prioritised, the human development indices of the North will continue to decrease”. They believe that education of the girl child will reduce child marriages andvesicovaginal fistula and lead to increased development outcomes politically and economically.  One of the ways they identified to immediately improve educational outcome is cooperation: let states jointly establish and manage institutions.

What I found most fascinating about the discussion was the fact that the governors recognisedthat their citizens have little or no trust in them. They acknowledge that this is a result of the bad governance previously experienced in several states. To redress this, some states are working very hard on building trust and accountability. Some of the measures they mentioned are radio townhall meetings, budget monitoring and implementation, passage of the Public Procurement Act, establishment of theBureau for Peace and Reconciliation, and establishment of aZakat (alms-giving) Board to collect and redistribute money amongst the poor..

The governors identified the Sustainable Development Goals (SDG) as a window of opportunity that they are keying into to bolster development.

The early part of the third day was dedicated to an open webinar on Northern Nigeria beyond BokoHaram; during this session, the public had the opportunity to ask the governor questions online. Two questions struck me the most: one on state police was answered with a general consensus that state police have become necessary considering the security demands in the country. Another question aboutwomen in politics was answered by several of the governors identifying culture as a challenge. However, they also explained that they are surmounting the challenges by reserving appointive positions for women in their cabinets.

In a meeting with civic business leaders, the governors had the opportunity to learn about initiatives which they can tap into immediately. One such opportunity is the U.S African Development Foundation (USADF), a five year MOU collaborative platform to economic development scheme for vulnerable communities, the scheme requires a $500,000 matching grant from the state. The governors were also advised to coordinate better with local and international partners. .

The issue of improving the business climate for domestic and foreign investors also came up for discussion during the three-day forum. It was agreed that buying into the Federal Government Ease of Doing Business Agenda would engender much needed economic opportunities for citizens.

The meeting didn't end without focus on the North East. The ongoing humanitarian situation in the region is dire, with 1,000 children dying on a weekly basis.If not urgently addressed, over 10,000 children may die by December. TheGovernor of Bornodisplayed much dexterity and mastery of the matter at hand. According to him, over1,450,000  IDPs are living in host communities in Maiduguri alone. He called for immediate attention to be given to IDPs in host communities to avert a humanitarian crisis.


On a lighter note, I was really impressed by the governors and theirdemeanour throughout the meeting.On arrival at Washinghton DC, I saw governor Tambuwal wheeling his own suitcases. At the opening itself, the Chairman of the Governors Forum, Shettima, made it clear that it was a difficult decision to attend the meeting as Nigeria is in recession and citizens may not understand the need for governors to participate.

All the governors attended the meetings throughout: participating every day from 8am often until as late as around 7pm. In a complete departure from previous years, the governors either attended alone or with just one aide. I also had the opportunity to arrive or depart from the venue with some of the governors, and nobody travelled in a limousine but instead used the everyday taxis of Washington DC.

I can only hope the commitment displayed by the governors to lift Northern Nigeria out of poverty and ensure the region’s development are matched with equal action in their states.


Idayat Hassan is the Director of the Centre for Democracy and Development.