Photos: At Least One Dead And Five Injured In London Terror Knife Attack


One woman has died and five people have been injured after a suspected terrorist went on a mass stabbing spree in central London. 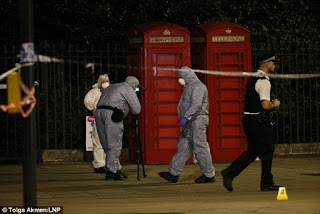 Police confirmed a 19-year-old man with mental health issues was arrested after he was seen 'brandishing a knife' and 'injuring people' in front of horrified onlookers in Russell Square at about 10.30pm last night. He was tasered by police following the incident outside the Imperial Hotel, in Southampton Row.

Fears that the knifeman operated with an accomplice were raised in the early hours as the Met refused
to rule out further suspects.

One witness said he saw 'a man flee on a motorbike', while another described hearing one of the victim's 'screaming and covered in blood'. 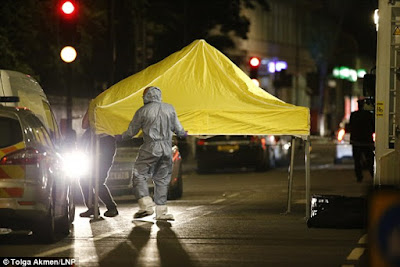 A witness, who gave his name as Michael, said he saw who he believes was the victim bleeding from her back while a friend who had also been stabbed was comforting her.

He was yards away from the incident at about 10.30pm on Wednesday and said although his thoughts were with the victim, he felt very lucky not to have been killed.
'I thank God I wasn't there - 30 seconds more and I may be dead,' he said.'I heard a scream, and then we went to the park and I saw a girl lying on the floor with blood coming from her back. Another girl had blood on her arm.'The two women were with two men who were shouting 'tío lo vi todo' in Spanish, meaning 'I saw everything'. The witness added:
'They all spoke Spanish so I guess they were a group. I only saw the victim and the girl with the arm stabbed from that group'I just saw blood just next to her. She was lying on the floor with a friend hugging her.'Michael said the victim, who he believes was the woman who later died, was slumped up against the metal fence opposite the Imperial Hotel in Russell Square.
He said:
'I was a block behind when I heard the scream, then we speed up to see what happened and they were there, the attacker was missing.'It happened on the sidewalk
'The victim was lying on the metal fence.
'A friend was hugging her so she won't fall.
'I'm pretty sure that she was the murdered, since everybody was panicking and she was just there.' 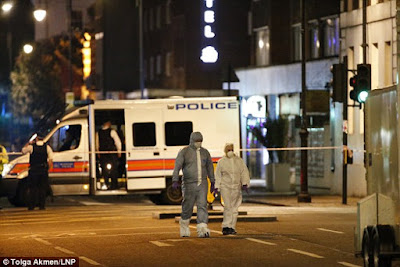 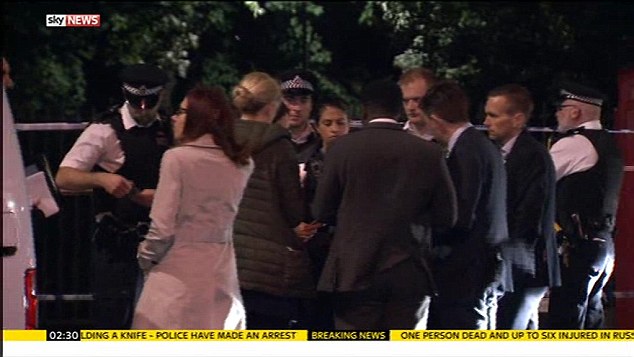 Officers arrived at the scene to find six people injured including a 60-year-old woman who died from her injuries a short time later.

The condition of the other five is not yet known and police have not yet named or revealed the ages of the victims.

The incident occurred in the same area as where one of the 7/7 bombs detonated in 2005.  A total of 26 people were killed when Germaine Lindsay, 19, detonated a suicide bomb on a Piccadilly line Tube as it moved between King's Cross station and Russell Square.