I Didn’t Kill My Wife, Lekan Shonde Tells Court, As Court Sends Him To 34 Days In Prison 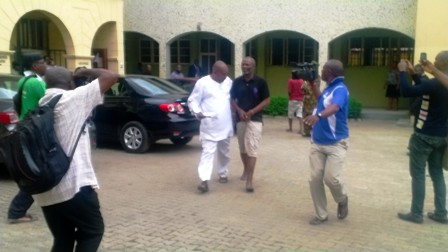 An Ebute Meta Chief Magistrate Court has ordered the remand of alleged wife killer, Lekan Shonde, in prison for 30 days. Lekan was arraigned this morning on charges of murder by the police. He is alleged to have killed his wife, Ronke Shonde at their Egbeda flat and fled.

The charge reads: “That you Shonde Olalekan, on May 5, 2016, at about 2030 hours at No. 3, Tiemo Street, Egbeda, in the Lagos Magisterial District, did kill one Ronke Shonde, ‘F’ age 37, by giving her fist blow on her head, and thereby committed an offence punishable under Section 221 of the Criminal Law of Lagos State, 2011.”

When he was asked if he understood the charge, Shonde asked for the last paragraph to be re-read, after which he replied, “I didn’t kill her.”
The case was adjourned till 24th of June.