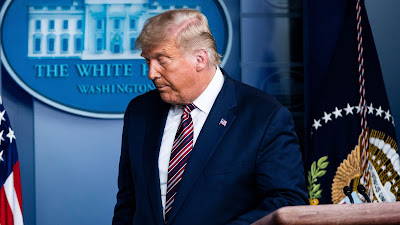 President Donald Trump has told advisers that he will refuse to leave the White House on Inauguration Day and has been throwing a massive 'temper tantrum' following his election loss, according to a new report.

It's been six weeks since Trump lost the election and this week the Electoral College confirmed Joe Biden was the victor in the contentious presidential race.

Trump has pursued a slew of lawsuits to overturn the election result and has gone on Twitter rants claiming voter fraud in a bid to stay in office.

Trump reportedly privately accepted he lost the election last month but has since reversed, egged on by advisers like Rudy Giuliani and Jenna Ellis.


At one point he told several advisers that he will refuse to leave the White House on January 20 but has since been talked out of that plan, though some believe he may try to stay put, according to CNN report citing multiple sources.

'He’s throwing a f***ing temper tantrum. He’s going to leave. He’s just lashing out,' an adviser said to the outlet.

Trump now reportedly spends his days mulling over the lost election, plotting ways to contest it, and devising revenge on Republicans he believes have turned on him, Fox News hosts and executives, Congressmembers and Cabinet members.

'He’s been fed so much misinformation that I think he actually thinks this thing was stolen from him,' a Trump adviser said of the president.