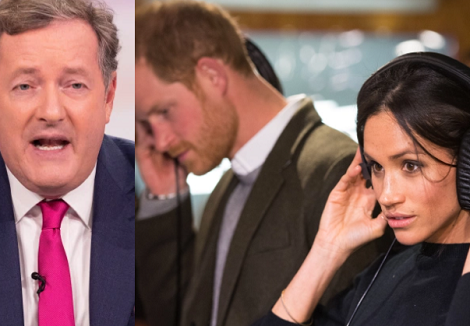 Piers Morgan has hit out at Prince Harry and Meghan Markle's "narcissistic" Spotify deal after he thought the trailer was a spoof.

The Good Morning Britain presenter branded the couple as "the most god-awful royal grifters" as they rake in £30million from their new venture.

The Duke and Duchess of Sussex giggled about having “podcast voices” and even hummed Christmas songs during the heavily scripted three-minute trailer that Piers thought was a joke.

Slamming the pair's new venture in the Daily Mail, he wrote: "As with everything the Duke and Duchess of Sussex seem to do these days, their new commercial venture appears to be driven by large dollops of narcissism, hypocrisy and greed."


The Archewell Audio podcast, which begins later this month, is the pair’s latest lucrative deal since they split from the Royal Family and vowed to become financially independent.

Mr Morgan continued: "Meghan and Harry have turned into the most god-awful royal grifters, cynically exploiting their royal status to line their own pockets."

"Honestly, when I first heard the promotional trailer for their new podcast, I assumed it was a spoof," he added.

This morning Piers pretended to vomit into a bin live on Good Morning Britain as he ranted on air about the couple's audio venture.

After removing the bin from his face, he said: "I'm so sorry, how awkward?"

Piers then added: "But underneath the vomit-making, look, if they want to do vomit-making podcasts - it's entirely their right - but it boils down once again, what are they thinking at Buckingham Palace?

"These two are still the Duke and Duchess of Sussex, they're still royals. They don't do any of the nasty stuff, you know the wet Wednesday at the care home in Stoke-on-Trent.

"They've bailed out of all that. And they're now making gazillions doing all these commercial - very commercial deals - which is absolutely fine except they're only making the money because they're the Duke and Duchess of Sussex. Otherwise they wouldn't make a bean."