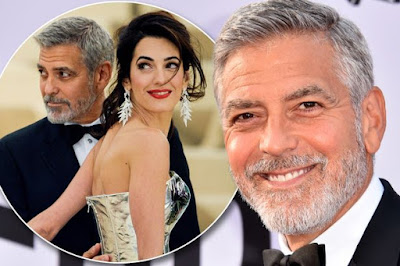 George Clooney is one generous pal as he gifted 14 of his friends $1million each in 2013.

And the Hollywood star's bountiful offering means that his accomplished wife Amal Alamuddin and their kids - Alexander and Ella - will not get his entire fortune.

George explained that the gesture came about after he met Amal but before he began dating the human rights lawyer and shared that he made the decision when he was penning his will.

George, 59, told Lorraine Kelly on Tuesday's Lorraine: "Most of my friends are trying to put their kids through school and college and most of them didn’t sort of get as lucky as I did.


"I just met Amal, but we weren’t dating, and I was making out my will and I was like, ‘Who you gonna give it to?’ And I was like, well I am going to give to these guys so why wait until we are all buying dentures?”

Seven-years-ago, the actor - who Forbes estimate is worth $500 million - invited his pals over to his mansion in 2013 before handing each of them a suitcase of money.

George - who tied the knot with Amal Alamuddin in 2014 - had Cindy Crawford 's husband Rande Gerber round at his house, as well as 13 others, as he thanked each one of them for helping him out back in the day.

Though it's not known who the others were, it's rumoured that businessman Mike Meldman, former actor Tommy Hinkley, actor Grant Heslov, and Curb Your Enthusiasm star Richard Kind were among the group.

Explaining his decision in a chat with GQ, George said he received an unexpectedly large paycheck from the hit film Gravity.

"What I do have are these guys who've all, over a period of 35 years, helped me in one way or another."

He said: "I thought, you know, without them I don’t have any of this. And we’re all really close, and I just thought basically if I get hit by a bus, they’re all in the will. So why the f**k am I waiting to get hit by a bus?"

A bachelor at the time, George said: "I was like, 'I’m never getting married. I’m not gonna have kids,' I’m gonna work, I’ve got great friends, my life is full, I’m doing well."