‘How I Lost My Pregnant Wife To Unlawful Arrest, Detention By Police’ 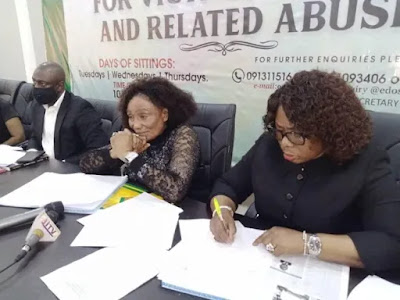 A 33-year-old farmer, Osazee Agbontaen, has narrated to the Edo State Judicial Panel of Inquiry for victims of SARS and related abuses, how he allegedly lost his pregnant wife due to his unlawful detention by police operatives.

Agbontaen, who resides at Ekowe Community in Ovia Northeast Local Government area of the state, told the panel that his wife who gave birth by cesarean section died while he was remanded in prison custody.

He added that he was arrested unlawfully based on a petition written against him and was detained for two weeks before being sent to prison.

“I was at home when some policemen invaded my house at about 2am and started banging on my door. Because I didn’t open for them on time, they pounced on me and beat me up, dragged me on the ground before throwing me into their van.


“They took me to their station, where I spent almost two weeks in their custody before they remanded me in prison,” he said.

The petitioner added that his wife who was carrying an eight-month old pregnancy would not have died if he were around to assist her.

“It was while I was in the prison that my family members came to tell me that my wife has put to bed through cesarean section.

“Ten days later, they also came to inform me in the prison that she couldn’t make it and has died.

“I was confused when I heard the news of the death of my wife,” Agbontaen said.

He noted that upon thorough investigations, the Department of Public Prosecution (DPP) and his Investigating Police Officer (IPO), came up to say he has no case to answer.

As if the death of his wife was not enough blow, the widower also complained that he lost everything he had and that while in the prison, his farm was overgrown with weeds, and that the left over parts of his farm was later destroyed by fire.