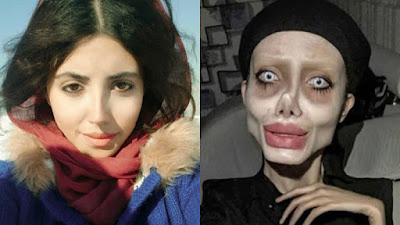 An Iranian woman who became known as a “Zombie Angelina Jolie” lookalike has been jailed after sharing creepy pictures online.

Sahar Tabar, 19, has been sentenced to 10 years in prison, her lawyer said.

The woman, whose real name is Fatemeh Khishvand, became known on social media after sharing distorted pictures of herself in which she looked like the zombie version of Angelina Jolie, The Sun reports.

She gained an Instagram following and was arrested last year.


Tabar was charged with corruption of young people and disrespect for the Islamic Republic, The Guardian reports.

She used make-up and Photoshop to post the pictures online, which she claimed she did “as a joke”.

Tabar also denied reports that she had carried out surgery to look like Angelina Jolie.

“This is Photoshop and makeup. Every time I publish a photo, I paint my face in an increasingly funny way,” the 19-year-old said.

“It is a way of expressing yourself, a kind of art. My fans know that this is not my real face.

“I did not even think about being like Jolie. Also, I did not want to resemble the cartoon character the Corpse Bride.”