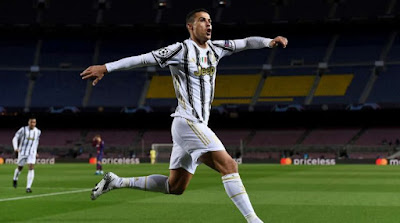 He won the battle of supremacy against his fierce rival, Messi, who failed to score at home against the visitors.

Ronaldo put Juventus in the lead on 13 minutes through a penalty.

He sent Marc-Andre ter Stegen the wrong way and fired the penalty into the middle of the goal.


On 20 minutes, Juan Cuadrado doubled the visitors’ lead, making it 2-0.

He played a terrific cross over to Weston McKennie, who found some space inside the box and puts the ball into the back of the net.

On first half added time, Lionel Messi went down under a challenge in the box, but the referee immediately waved away the appeals from all players.

Ronaldo compounded Barcelona’s misery with a third goal for the visitor on 52 minutes.

He won the battle of wills and sent an unstoppable penalty past Marc-Andre ter Stegen into left side of the goal.

Juventus made it 4-0 on 75 minutes, but the goal was ruled offside by VAR.

Leonardo Bonucci scored the disallowed goal after an assist by Cristiano Ronaldo that allowed him to tap in the ball into an empty net.