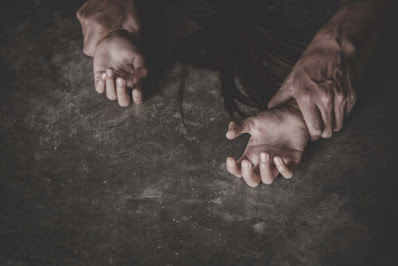 An Ebonyi State Magistrate’s Court on Monday remanded in a custodial centre a 32-year-old man, Emeke Chukwuani, for allegedly r3ping a hawker in the state.

The victim, a groundnut seller, was reportedly returning home with her younger sister in the evening when the suspect snatched her phone and ran into Fatilami Park, in the Abakaliki Local Government Area of the state on November 28, 2020.

Apparently to recover her phone from the assailant, the victim ran after him into the park, where she was allegedly r3ped.

Narrating her ordeal, the 23-year-old said, “I was going home with my younger sister around 8.30pm when we saw the man on the way. He wanted to talk to us, but we continued to move. He followed us, snatched my phone and ran into Fatilami Park.


“We ran after him to give me my phone. Immediately we got to the photo stand in the park, he grabbed my neck and we began to struggle. As we struggled, he bit me in my private parts, ear, cheek, shoulder and back.

“My sister was shouting, but nobody was there to help us. When my sister tried to draw him away from my body, he smashed a bottle on her head. She ran outside crying, while I was shouting inside. It was when he hit my mouth with the bottle that I became unconscious. I woke up later to see that he had r3ped me.

“I was surprised when I heard gunshots and two persons came inside. He tried to run away, but they apprehended him. That’s when I realised that they were police officers.”

The suspect was arraigned on Monday before the Abakaliki Magistrate’s Court on one count of unlawful s3xual intercourse.

The police prosecutor, Inspector Chinedu Mbam, said the offence was punishable under Section 358 of the Criminal Code Cap. 33, Vol. 1, Laws of Ebonyi State of Nigeria 2009.

The charge read, “That you, Emeka Chukwuani, on November 28, 2020, at Fatilami Park, Abakaliki, in the Abakaliki Magisterial District, did forcefully have carnal knowledge of one (name withheld), aged 23 years, without her consent, thereby committing an offence punishable under Section 358 of the Criminal Code Cap. 33, Vol. 1, Laws of Ebonyi State of Nigeria, 2009.”

The suspect was not represented in court.

The Chief Magistrate, Mrs B.I. Chukwu, ordered that he be remanded in the custodial centre, Abakaliki, while his case file should be forwarded to the Directorate of Public Prosecutions, for legal advice.

The case was adjourned till December 11, 2020, for report of compliance.