One Dies As Fuel Tanker Falls Along Benin-Ijebu-Ode Road 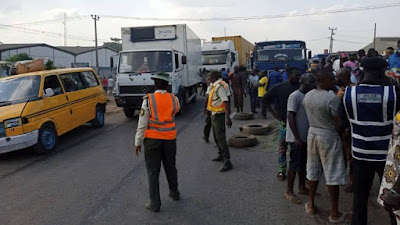 One person has been killed as a fuel tanker laden with diesel lost control and fell in front of a Toyota car, marked EKY 471 BR, along the Benin-Ijebu-Ode highway in Ogun State.

The accident occurred around 7:40 am on Sunday.

Akinbiyi informed that the dead victim, who was the driver of the Toyota car, has been deposited at the General Hospital, Ijebu-Ode, adding that the driver of a Volvo truck with registration number, APP 595 XW, has been arrested for driving against traffic and being the cause of the road crash.

“However, the diesel tanker behind the Toyota vehicle couldn’t control its speed, lost control and fell on its side, spilling its content. But thank God there was no fire outbreak.

“The driver and motor boy of the Volvo Truck have been arrested and taken to Igbeba Police Station, Ijebu-Ode.

Meanwhile, the Ogun State traffic agency has admonished, “drivers of articulated vehicles to desist from driving in a direction prohibited by traffic law because of its attendant consequences, more so that the harmattan is setting in and driving skills are challenged.”