Trader Stabs Wife To Death, Cuts Both Hands Over Money In Lagos 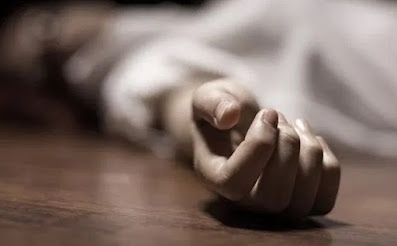 There was shock on Adekunle Street in the Oshodi area of Lagos after a middle-aged man, Ifeanyi Nwagboroga, stabbed his wife, Faith Ebubeeze, several times on her body until she died over an argument bordering on money for the family.

SaharaReporters learnt from a police report that after the argument ensued, Nwagboroga, a trader, tied his wife’s mouth, cut off her two hands and started stabbing her.

The police at the Ire-Akari division later arrested Nwagboroga after his wife’s younger brother, Emmanuel Onyeka, who lived on a neighbouring street, brought the matter to the attention of the operatives.


A witness told SaharaReporters that trouble started on November 24, after the woman came back from Arena Market in the Oshodi area, where she had gone to sell some items.

“Nobody knows the amount involved. But the couple had been having issues recently about money and how to take care of the family. On the said day, it was about 8pm, and we started hearing their violent arguments. Nobody bothered to intervene because we were used to such scuffles.

“But later, the chilling cries of the woman brought the attention of neighbours and then we discovered that Ifeanyi (Nwagboroga) had got a knife and was stabbing his wife all over the body. It was shocking and we were all embroiled in the confusion for days.

“Then, the family members were contacted and the matter was brought to the attention of the police.”

SaharaReporters learnt that the couple, whose number of children could not yet be ascertained, recently started having financial crisis after their trades experienced a downturn, as a result of hard times in the country.

A police report stated that the suspect had been transferred to the State Criminal Investigation Department, Yaba, for further investigation.

The report said, “One Emmanuel Onyeka of Oredeyin Street, Off Araromi Street, Oshodi, Lagos State, came to the charge room, and reported that Faith Ebubeeze and the husband by name, Ifeanyi Nwagboroga, of the same address, were arguing when she came back from Arena market, where she sold some items.

“At the cause of the argument, the said husband went into the kitchen, carried a knife and stabbed the wife to death. He, the husband, also tied the wife’s mouth and cut off her two hands and stabbed all parts of her. The suspect is now in custody.”