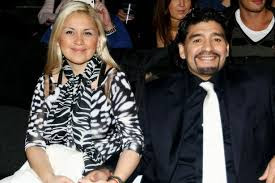 Carlos Ferro Viera who is a close friend of late Argentine football legend Diego Maradona has claimed that his pal has another two children who are living with their mother in Spain.

Viera lived in Cuba with the 1986 World Cup winner after he moved to the Caribbean island in February 2000.

According to the report on Mirror, Viera claimed that Diego Maradona dated during his stay and had two children even though re refused to reveal their names.

Interestingly, Carlos Ferro Viera was reported to have identified the name of the mother as Laura Cibilla.


She was a waitress then and the only woman who lost a paternity suit against Maradona after he agreed to take a DNA test 10 years ago to prove he was not the father of her son.

The test is said to have come back negative but Carlos is insisting the woman had another two children for the football legend.

Although, Laura is said to be living in Spain, but her actual location is not known according to the report.

Before his death last week Wednesday, Diego Maradona reportedly claimed that he is the father of only five children.

Maradona played 91 games for Argentina and his last international match was against the Super Eagles of Nigeria at the 1994 World Cup in USA.