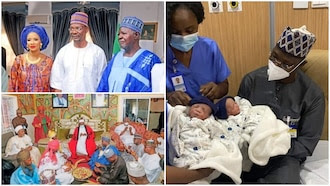 The Governor has since named the twins after two prominent political figures in Nigeria.

During the naming ceremony which took place on Tuesday, December 1, at the palace of the governor’s father in Gudi, Akwanga, the Governor explained why he named his twins after the political figures. He revealed he did because of the respect he has for the two leaders.