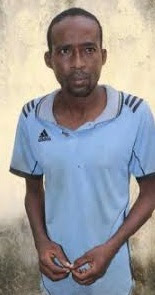 37-year-old Abubakar Maidabo of Maidabo village in the Magama Local Government Area of Niger State was arrested by the police for killing his two biological sons, Umar Abubakar (eight) and Shehu Abubakar (four). He tells Enyioha Opara how he committed the act, blaming it on evil spirits.

You were arrested for allegedly killing your two sons. Did you really do that?

I actually killed them but cannot justify the reason for committing the atrocity.

How did it happen?

I think I woke up on the wrong side on that fateful day. I was unnecessarily angry with myself that I regretted having children; for just no reason, I cannot explain how the spirit of Satan befell me to develop natural hatred for my little boys on that very day. I just called them and started beating them up. I took the elder one, Umar, to my room, slit his throat with a cutlass and he bled to death. I quickly called Shehu to come to my room.


Did he see his older brother’s corpse?

By that time, I had covered his brother with a cloth so that he would not find out and as soon as he entered my room he asked me where Umar was and I told him that I sent him on an errand. But, immediately, I dragged him to one corner of my room and killed him the same way I killed his brother. When I wanted to run away, I was nabbed by the police, following a tip-off.

When did you start nursing the idea to kill your two sons?

Honestly, the idea came on that very day I killed them (November 14, 2020). I did not plan it at all. I can’t explain what has come over me. As I am talking to you now, I can’t even explain how the whole thing happened. I think somebody is after me and my family, otherwise why should I kill my two biological sons? What have they done to deserve that? It’s unbelievable. My greatest worry now is that nobody, including members of my family, will believe my story. After this ugly incident, I still doubted myself as to whether I actually carried out this wicked act on my two precious sons Allah gave to me. I don’t think I deserve mercy at all. One thing is certain: it is not ordinary. But whatever might be the case, let the law take its course.

Do you have any issue with your marriage?

I got married 12 years ago and we have been living peacefully. So, I don’t have any problem with my wife. We love each other and are always planning for the future of our children. The community was thrown into a state of shock when they heard what happened, that I killed my two children. Frankly speaking, they did not believe that. Rather, they said that it was not ordinary.

Where was your wife when you murdered your sons?

My wife travelled with my last child to her village in Magama to see her people on the day I killed my sons. She had no idea of what transpired. She was shocked when she was told what happened. She could not believe it. She thought it was a fairy tale. I was told she couldn’t talk for more than two hours by that time I was already in police custody.