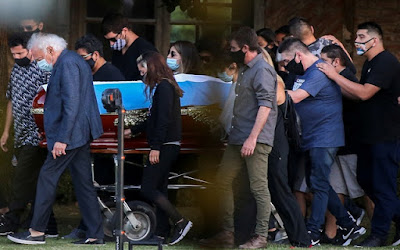 Grieving fans of Diego Maradona have clashed with police as they scrambled to get a glimpse of the Argentine football legend’s casket in Buenos Aires.

Grief and passion boiled over as heartbroken supporters broke through barriers and brawled with riot police near the presidential palace.

Pictures also show hordes of tearful fans surrounding a white hearse last night as they desperately hoped for a glimpse of their hero’s final journey through the capital. Tens of thousands of Argentines took to the streets to mourn him, leaving flowers and messages at his childhood home and at Boca Juniors’ stadium

Maradona became a star in Buenos Aires with Boca Juniors and went on to be a national hero and cultural icon in Argentina. His body will now lie in state for three days at the presidential palace.


Argentina’s president Alberto Fernandez has decreed three days of mourning after the death of the legendary player of a suspected heart attack aged 60.

“His unparalleled footballing skill transformed him into one of the best-known people in the world, crossing frontiers and being universally recognized as the world’s best player,” said the official mourning decree.

“Diego”, “Pelusa”, or simply “God”, as Maradona was known, had a long career that included leading the South American nation to World Cup glory in 1986.

Maradona’s body lay in a wooden coffin with the blue and white national flag and an Argentina soccer jersey with the famous number 10. It had been part of his nickname “D10S” – a play on “dios”, the Spanish word for God.

Fans held back by a barrier threw things towards the casket, including soccer shirts, as they tried to get near the player.

Maradona became a hero in Argentina and beyond both on and off the pitch despite his well-documented flaws.

“He was someone who touched the sky with his hands but never took his feet off the ground,” President Fernandez said on Wednesday.