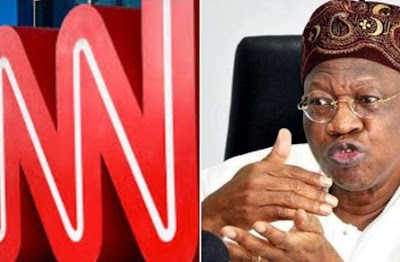 The Federal government has vowed to punish the Cable Network News, CNN for carrying out unverified information from the controversial Lekki Toll Gate protest.

It also vowed not to spare any media organization both local and international that attempted to set Nigeria on fire through unverifiable reportage.

The Minister of Information and Culture, Alh. Lai Mohammed made the vow on Friday at a stakeholder’ meeting with the Broadcasting Organizations of Nigeria (BON) held in Abuja.

The Minister, was reacting to the controversial report by the American  Cable News Network, CNN which it said had acknowledged their letter of complaint and promised to probe same on its merit.


He accused CNN of spreading fake news by switching casualty figures at Lekki Toll Gate  so casually without a credible source, hence, its decision to write a letter to CNN asking it to use its own internal mechanism to probe its investigation.

Mohammed insisted that “the use of unverified videos and the non-adherence to the basic tenets of journalism have combined to land the international broadcaster, CNN, in trouble”, saying that the station had been caught in the web of fake news and disinformation, after it relied heavily on videos it took from social media for a supposed exclusive investigation on the incident at the Lekki Toll Gate on Oct. 20th.

He also stated that the station was found to be inconsistent, adding that “after tweeting, without a shred of evidence, from its verified handle on Oct. 23rd that soldier killed 38 peaceful protesters at the Lekki Toll Gate on Oct. 20th, the same station now said only one person was killed – after a month of its investigation.”

His words: “It is baffling that an organization like CNN will rely on unauthenticated videos to carry out an investigation

“More worrisome is that an international broadcaster like CNN will switch casualty figures so casually without a credible source.

“This is why we have written a letter to CNN asking it to use its own internal mechanism to probe its investigation.

“We have received an acknowledgement of our letter, saying the letter has been referred to CNN’s Editorial Team.

“We await the outcome of their probe, but that’s without prejudice to whatever we may decide to do as a government.

“We will not sit by and allow any news organization, local or foreign, to set Nigeria on fire with irresponsible and unprofessional reporting.

“CNN did not have a reporter or cameraman at the Lekki Toll Gate on the night in question, yet it emphatically reported a hoax story.