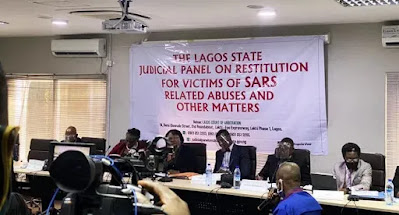 The Lagos State Judicial Panel of Enquiry and Restitution for Victims of SARS related Abuses and other matters was told that a petitioner Mr Basil Ejiagwa has died as a result of torture melted to him by the Police.

Counsel to the late petitioner, Olalekan Gazali, said that the wife of the deceased who came all the way from Imo state was at the panel last week, but that the case couldn’t go on.

When the matter was called for hearing today, Gazali told the panel, “The petitioner is no more. We lost him last week as a result of the torture melted to him by SARS. The wife came to this panel with his picture to show the state of his health, but unfortunately, the matter did not go on.

“We were to come last Saturday but when we placed a call to the wife, she said she could not come. I want it on record that his wife was here last week. That is because of findings of panel. The reason she’s not here now is because she’s bereaved and mourning her husband.


“The relative of the deceased is here in representative capacity to state how fractures sustained by Mr Ejiagwa developed into brain tumor and all the hospital bill is here before us stating his severe health challenge, and all his money was spent on his health before his demise.”

The deceased’s cousin Chukwu Vincent, told the panel that the Police used big iron hammer to damage his two legs and thereafter took him to Ikeja SARS.

Vincent said late Ejiagwa was arrested on his way from work at Alaba International. “On his way home, he was arrested by men of Nigerian police in a korope bus. He was arrested at a place called at Igando,” he said.

Vincent further narrated that the petitioner was arrested and kept at the Igando Police station, for nine days, before he was taken to Ikeja SARS office and released on May 31, 2014.

He said, “The police used gun butt to break his head and made him to loose his memory. After sometime he could walk and do certain things, as at the first time of the injury on his head, the tumor did not start immediately.

“We rushed him to Elshaddai private hospital at Iba Igando road by Iyana School bus stop, where he was treated and later diagnosed with brain tumor.

The witness who was led in evidence by Gazali, said the petitioner got a judgment of N40million against SARS, from the Lagos Federal High Court on April 16, 2019, but that he was yet to get the judgment sum before his death.

Vincent also said that a bill of N1million was spent on deceased’s treatment.

He said ” Ejiagwa was arrested on his way back from work, at Alaba International market ”

While being cross examined by the Police counsel Mr Joseph Eboseremen, he said the incident happened in 2014, adding that at first he was unable to move, and that he also used his personal money for his cousin’s treatment.

Asked what the diagnosis conducted was, he said from the results, the hitting of the guns on late Ejiagwa’s head. “He couldn’t remember anything. He used to go abroad to purchase goods. But he couldn’t remember certain things again.He was the one who filed the suit before the court.

When he got himself on two legs. He started filing cases at the Federal High Court in 2017, ” he stated.

Receipts, drug prescriptions, etc of Alimosho General Hospital, etc were admitted by the panel as exhibits

Vincent appealed to the panel to compel the police to obey the court judgment delivered on behalf of late Basil.

He said, “On behalf of the family of Basil Ejiagwa, I am appealing to this panel to help us to enforce the judgment against the police, because the judgment was delivered since last year, April 16, 2019 and up till now we haven’t heard anything from the police. We have even lost the person involved in the process

“The incident happened about five to six years ago, the judgment of N40million that was delivered last year, on April 16, 2019, and up till now we have not heard anything from the police,’ he said.

He also said that Ejiagwa was taken to the east when his health became critical and he died on November 17, 2020.

“We were advised to take him to the village when his health became critical, when you look at him, he looks like a different person. He died in the village last week on 17 November 2020.

He presented photocopies of receipts and the picture of the deceased victim, from the hospital as evidence in the case.

The case was adjourned till December 4, for further hearing.