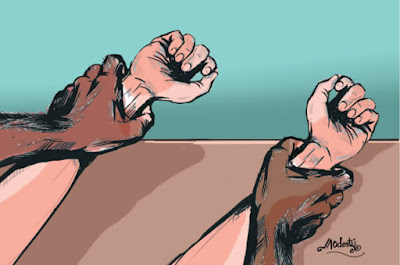 Hanyi Danmani is a suburb of Kaduna metropolis bordering Rigasa (the largest community in Kaduna where Abuja-Kaduna train terminal is located).

The little girl was lucky to be alive unlike the two others of her age who were recently r.a.p.ed..to death and dumped at a mosque and graveyard respectively.

Confirming the latest development on Monday, Village Head of Hanyi Danmani, Umar Ibrahim said, the girl was recuperating from bruises she sustained during the defilement by her parents’ neighbour simply identified as Ibrahim.


According to him, “it is true. The case is in Rigasa Police station. But this morning they told me that they are trying to transfer the case to the state Criminal Investigation Department (CID).

“The rape case involved a girl of about six-year-old girl and that man is about 50-year-old. He has his family with two wives. He has his own house as a neighbour to the parents of this girl.

“It happened on Friday but Police then said they should come by Monday. So today, the community went there as instructed.

“I was told that the police are done with the hospital report and they are now transferring the case to the CID.

“According to the mother, it was a very horrible face but she said her daughter is responding to treatment.”

Police Public Relations Officer, ASP Mohammed Jalige, could not be reached for comment as he did not answer his phone call as at the time of filing this report.