A 60-year-old bachelor, Segun Benson, has
been accused of molesting a 14-year-old
primary school pupil in Agege.Segun, the
only surviving child of his mother who has
refused to be married, was said to have lured
the girl into his room with N50 where he
forcefully had a canal knowledge of her. 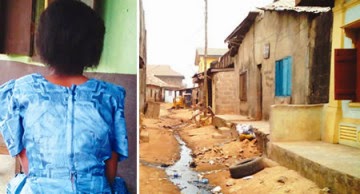 Narrating her gory experience, the victim
said, â€œI am in primary six. On Friday, he gave
me N50 to buy sweet for myself. He then
asked me to caress his private parts. When I
told him I would tell my daddy, he said I
should not go home.

â€œHe took me to his house around
Railway Line where he molested me. I
was there from 3pm till around 7pm. I
started bleeding from his house and
when I got home the blood did not
stop. But I kept it secret until Saturday
when people saw it.â€

The victimâ€™s mother, Taibat narrated
how she found out.
â€œI have seven kids and she is the third
child. I was sleeping when people
called me that my daughter had been
molested. I have never met the man
before though he lives on the street.

The government should take over the
case and do what is right.â€
A resident who raised the alarm when she
saw the girl bleeding added her side of the
story,
â€œI saw her writhing in pain in a
bathroom. She said she wanted to
defecate, but I saw blood coming out
of her private parts. I raised the alarm
and when other people arrived at the
scene, she said it was Segun that
molested her.â€
A relative, Okunloye Kehinde, said the
victimâ€™s private parts had been
damaged.

â€œI got a call around 2pm that fateful
Saturday. When I got there, I saw a
crowd of people around her. I saw a
container filled with blood. Even her
clothes were drenched in blood.â€
But the victims ,mother was seen pleading
for help. She said Segun is her only surviving
child.

â€œSegun is my only child. I had four other
children and they are all dead. He is the
reason for my living. I donâ€™t know why
he did what he did.

â€œEach time I tried to get him a wife, he
refused and told me he was old enough
to look for a woman for himself. He
said that many times without getting a
wife. Please help me because heâ€™s my
hope.â€
When contacted, the Police Public Relations
Officer, Kenneth Nwosu, said the case had
been transferred to the State Criminal
Investigation Department, Yaba.