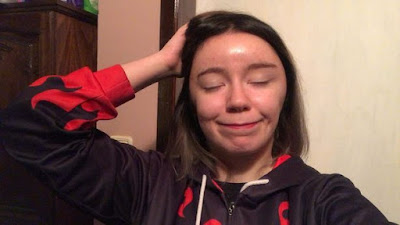 A young woman who woke up to find her head had swollen to the size of a football after she had an allergic reaction to hair dye has called on people to "be smart" and always get a patch test.

Valentina Nikolova, 20 and from Sofia, Bulgaria, decided to dye her hair half black at a salon.

Psychology student Valentina had used temporary dyes and other colours before, but within 24 hours of dying her hair, Valentina noticed her scalp started to itch to a point where she felt like she was in "hell".

Her hairdresser had told her that it was normal for the scalp to itch after dying the hair, so she didn’t worry too much.


But when she woke up the next day, Valentina’s head had swollen into a ball shape and she struggled to open her eyes.

Valentina went to an allergist where she was given a corticosteroid injection and prescribed antihistamines to take down the swelling.

She is now speaking out to warn people of the importance of taking a patch test prior to dying your hair.

Recollecting what she described as an anxiety-inducing experience, Valentina said: “During the first twenty-four hours after dying my hair, my scalp started itching. I went to bed and the next day the top half of my head was swollen.

“On the second day the swelling got to the lower half of my head and my eyes were halfway closed. My head looked like a ball – you could say a football or something similar, it just had a very spherical shape.

“I was really scared and anxiety crept in on me when I first saw myself in the mirror. I couldn't believe it was me.

“When it started to itch, I was in hell. You know when you get sunburnt and every movement is painful? It was worse than that."

On the fourth day the swelling started to go down but the outer layer of her scalp started falling off because her skin was regenerating.

“I went to an allergist and they gave me a corticosteroid injection and also prescribed me some medicine.”

Valentina suffered an allergic reaction to a chemical found in most hair dyes called paraphenylenediamine (PPD).

Many permanent and some semi-permanent hair dyes contain chemical PPD, which is known as an irritant and allergen. Dyes containing PPD are usually safe to use.

“I didn't do a patch test and I advise people to do patch tests before dying their hair in order to avoid this,” said Valentina.

“I would never dye my hair black again, but I would with temporary hair dyes.

“If you have a reaction and are self-conscious about it like I was, wear a hoodie and glasses if you don't want people to see you like this. Use baby hair shampoo so that you do not irritate your skin.

“Go to the doctors immediately after you realise you are having an allergic reaction and take the medicine they prescribe you. Do not panic, because everything will be okay, and it is only temporary.

“Please, do a patch test before dying your hair, no matter what colour it is and no matter if it is temporary or permanent.

“Having a dye of high quality does not mean that you won't have an allergic reaction. Be smart.”