Trump Declares Himself Winner Of US Election 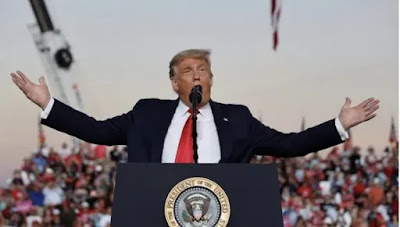 U.S. President Donald Trump in a new tweet declared himself the winner of the 3 November election.

“I won the election”, Trump declared in all-caps tweet on Monday morning.

Twitter responded moments later by tagging the tweet with a link that says: Official sources call this election differently’.

Joe Biden and Kamala Harris were projected winners of the election on 10 November.


Following American tradition, Biden had since declared victory and set up a transition team.

He has also appointed Ron Klain as chief of staff.

I WON THE ELECTION!

Trump’s tweet was a continuation of his Twitter rants since Sunday, when he first acknowledged Joe Biden was the winner of the election.

Then simultaneously, he claimed the victory was because the election was rigged.

He then later tweeted that he was not going to concede as he planned to file ‘big cases’ soon.

He continued the theme of election rigging in three other tweets flagged by Twitter as ‘disputed claims’.


....perhaps like never before! From large numbers of Poll Watchers that were thrown out of vote counting rooms in many of our States, to millions of ballots that have been altered by Democrats, only for Democrats, to voting after the Election was over, to using Radical Left

....owned Dominion Voting Systems, turned down by Texas and many others because it was not good or secure, those responsible for the safeguarding of our Constitution cannot allow the Fake results of the 2020 Mail-In Election to stand. The World is watching!