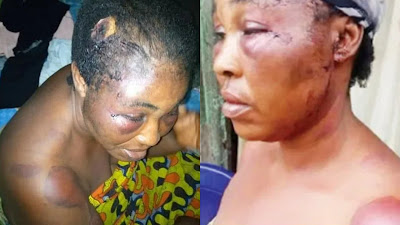 Officers of River Police Command have arrested the leader of the Etche legislative assembly in the Etche Local Government Area of Rivers State, Blackson Nwanyawu, for allegedly brutalizing a mother of six over allegation of witchcraft.

The battered woman, Love Nwanyawu, told journalists that the Councillor who is her husband’ s younger brother, along with two others, beat her to a pulp over allegation that she is a witch and has been bringing misfortunes to the family .

With a badly battered , swollen face, lacerations and bruises on her head, Nwanyawu said her ordeal began when she traveled to her husband’ s hometown, Omualu community and overheard the Councillor, his sister and a male relative, shouting on top of their voices in an intense argument.

She said Blackson and other persons then accused her of witchcraft and vowed to deal with her.


“I was surprised. The next thing I saw was that the three of them came at me, saying I was disturbing them and that I was a witch. They said anytime I come back, the house would not rest. I said how?

“They pounced on me and gave me a beating of my life. Just look at me. Their plan was to eliminate me. After beating me and locking me up, one went outside, brought a chair and used it to hit my head twice. When he ( councilor ) saw that blood was gushing out, he drove off . Others also left. With the blood, I shouted for help. They all said their brother is a Councilor and Leader of Etche legislative Assembly and nothing will happen.

“I am calling for people to help me to seek justice. My husband , I trained him from secondary school to University. He lived with me for years when my children were small. I paid his last school fees and he promised that when he graduated, he would ensure my children did not suffer .

“I was asking him,’ is this the promise you gave me?’ Look at how he made me. He wanted to send me to an early grave,” Nwanyawu said.

She claimed her husband has been ill because he was traumatized by the incident.

In his reaction, the accused Councillor, in a telephone interview aired on a radio station ( Nigeria Info 92 .3 FM , Port Harcourt) claimed that his brother’s wife insulted him .

“The woman keeps insulting me every day, when I have not had any issue with her. Your father called me; I say I am not regretting my action. I have tolerated more than I can bear,” he stated .

Blackson claimed the victim has been disparaging his reputation in the social media and that he would seek redress in court for remedies.

He promised to honour a Police invitation on the matter and make himself available for Investigation.

In a press statement, by SP Nnamdi Omoni, the spokesman for the state police command , confirmed receipt of the complaint, saying the matter was being investigated .

Omoni said, “The report got to us and we have initiated action. A team has been put in place, the suspect is with us to answer questions over the allegations against him. I am the officer in charge of the human rights desk, so, I am investigating the matter.

Prince Wiro, a Port Harcourt based rights activist enjoined the Police to ensure that the woman gets Justice.

“It is inconceivable that a woman can be so beaten and battered because they feel that they are above the law. This is a clear case of human rights abuse all those involved should be prosecuted as a deterrent that nobody is above the law”.