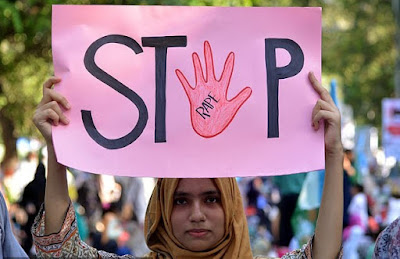 A mother and her four-year-old daughter were kidnapped and gang-r.a.ped for two weeks in Pakistan after attackers lured the woman with false promises of well-paid work.

A man has been arrested for the violent crime which took place in Kashmore, a district in Pakistan's Sindh province, police said on Tuesday.

He has been identified as Rafiq Malik, a resident of Kashmore who owned land there, local media reported, adding that police are questioning Malik after he was remanded in custody for three days.

Police continue to search for his two accomplices.


Neither the woman nor her child have been named but it is believed the mother was a hospital worker from Karachi who had been persuaded to attend to someone after the suspects offered her a large sum of money for the work.

Thereafter, the woman and her daughter were abducted by the group.

'The suspects kidnapped them and kept them in custody for 15 days,' Samaa reported a police officer as saying.

The men reportedly r.a.p.e.d the woman and her child repeatedly over that time.

The group then released the mother and told her to bring them more women from Karachi. Meanwhile, they kept her daughter, threatening to murder her if the woman did not comply with their demand.

Samaa reported that the woman immediately went to police in Kashmore who were able to find and rescue her daughter.

Last month, the rape of a woman outside Lahore sparked unprecedented protests and calls from international rights groups for Pakistan to reform its judicial system.

The woman's car had ran out of petrol while she was out with her two children. She called for assistance but was dragged from the vehicle and raped by two men as she waited by the side of the road.

Protests erupted after the lead investigator Umar Sheikh suggested the woman was to blame for the attack, saying she should have travelled on a busier road during the day and checked her petrol before setting out.

Amnesty International released a message in support of protesters saying: 'There have been too many victims and too few convictions of perpetrators in a criminal justice system characterised by impunity.'