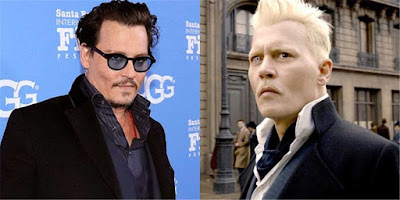 Johnny Depp will reportedly pocket his $10 million salary from his work on Fantastic Beasts 3 despite being axed after only filming one scene.

The 57-year-old Hollywood star was cut from the film by Warner Bros. after he lost a libel suit against The Sun in which they alleged he was a "wife beater."

The actor has only worked for one day on the new sequel to Fantastic Beasts, since filming began in London on September 30.

The Hollywood Reporter has said that Depp will still receive his full salary for playing Gellert Grindelwald in the JK Rowling series, despite being told that he would be leaving the franchise with immediate effect after the verdict in the libel trial.


The movie has also been delayed until July 15, 2022 due to the coronavirus pandemic, after originally being slated for a November 12, 2021 release.

The Pirates of the Caribbean star reportedly had a pay-to-play provision in his contract, which meant that he would be paid in full regardless of what happened with the movie.

This included if the film was scrapped altogether or if Depp's character was played by another actor, with Jude Law and Eddie Redmayne among the favourites to replace him.

It has been reported that Warner Bros. did not axe Depp from the film but, instead, asked him to step down from his role in the franchise, which has taken $1.4 billion at the box office worldwide.

Depp took to Instagram last week to share his feelings on the issue and stated that "the allegations against [him] are false."

He added that his "life and career will not be defined by this moment in time".

Speaking to his fans, Depp added: "I’d like to thank everybody who has gifted me with their support and loyalty.

"I have been humbled and moved by your many messages of love and concern, particularly over the last few days."

Warner Bros. said in a statement: "We thank Johnny for his work on the films to date."

Agueda w 08:34 Tue, 10 Nov 2020
Hello to all, how iss all, I think every one is getting
more from this web page, and your views are fastidious for new users.

Laverne w 11:02 Tue, 10 Nov 2020
Thanks for your personal marvelous posting! I quite enjoyed reading it, yyou might be a great author.I will make sure tto bookmark youur blog
and definitely will come back in the future.
I want to encourage you to continue your great posts,
have a nice weekend!
метенолон homepage тренболон