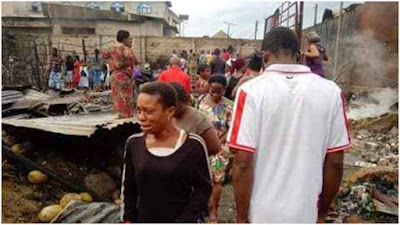 Sixteen market women have been abducted in Ondo State by gunmen suspected to be kidnappers.

The kidnappers, numbering about 10, who were said to be fully armed, struck on the busy Akure/Owo road and waylaid the market women who were on transit from Akoko axis of the State to Akure, the Ondo State capital.

Among the kidnapped market women was the Iyaloja of Isua-Akoko, in Akoko South East Local Government area of the state, Chief Mrs Helen Edward who was leading the other women to the monthly meeting of Iyalaje, Iyalojas, as well as women leaders in Akure.

The women were abducted between Ogbese and Uso of the Akure/Owo road.


Upon kidnapping the women, the driver of the bus conveying them was immediately released by the abductors who instructed him to go and inform the families of the victims.

Meanwhile, 10 of the market women have been rescued with four of the suspected kidnappers arrested.

The Spokesperson of the Ondo State Police Command, ASP Tee-Leo Ikoro disclosed this when contacted upon the development.

Ikoro added that efforts were ongoing to rescue the remaining victims.