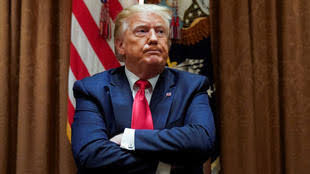 U.S. President Donald Trump has claimed without evidence that bad things’ happened at counting centres in Pennsylvania and other states, where his overnight lead on Tuesday, against Joe Biden, went up in smoke.

In four tweets now flagged by Twitter police as conveying false and misleading information, Trump alleged a lot of things.

He claimed among others that “Tractors blocked doors & windows were covered with thick cardboard so that observers could not see into the count rooms”.


“Bad things took place during those hours where LEGAL TRANSPARENCY was viciously & crudely not allowed. Tractors blocked doors & windows were covered with thick cardboard so that observers could not see into the count rooms. BAD THINGS HAPPENED INSIDE. BIG CHANGES TOOK PLACE!

“This would ALSO change the Election result in numerous States, including Pennsylvania, which everyone thought was easily won on Election Night, only to see a massive lead disappear, without anyone being allowed to OBSERVE, for long intervals of time, what the happened…

“People were screaming STOP THE COUNT & WE DEMAND TRANSPARENCY (As Legal Observers were refused admittance to count rooms)!