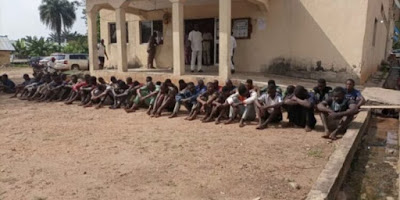 69 suspected looters arrested in Osun State have been arraigned at the State High Court, Osogbo and subsequently remanded in Ilesa Custodial Centre.

According to the Osun State Police Command, eight suspects are still under investigation.

The suspects were charged to court over their involvement in the destructive invasion, vandalism and looting of public and private properties across the State.

The suspects appeared before Magistrates Ayilara Olusegun, Ajiboye B. O., Oloyede O. A. and Awodele M.O. on Friday, Monday and Tuesday.


The Osun State Police Command had on Tuesday announced that it had made arrests in connection with the looting spree across the state, adding that investigations were ongoing on the suspects’ culpability.

According to the Special Adviser to the Governor of the State of Osun on Security, Mrs Abiodun Ige, the 69 persons that were tried have been remanded in the Custodian Centre, Ilesa, adding that those who embraced the State Government’s offer of amnesty were pardoned according to Governor Oyetola’s promise.

Governor Adegboyega Oyetola had promised amnesty to those who returned looted properties in their possession within a 72-hour time frame while those caught with looted items after the amnesty window closed would face the full might of the law.

Ige also stated that the law enforcement agents are working with the government to further maintain peace and stability within the State.