Four Suspects Nabbed Over Looting Of Police Station In Rivers 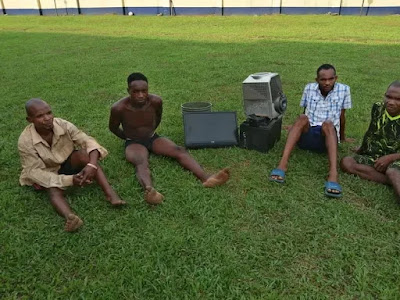 The Police in Rivers have paraded four suspects who allegedly participated in the looting and destruction of Afam police station during the recent mayhem in Oyigbo Local Government Area of the state.

Rivers Police Public Relations Officer, SP Nnamdi Omoni, told journalists that the suspects were arrested as part of the efforts of the State Commissioner of Police, Joseph Mukan, to bring perpetrators of the wanton destruction of all police stations in Oyibo local government area to book.

He said the suspects had confessed to the crimes and they would be handed over to the State Criminal Investigation Department, SCID, for further investigation and to get information that can further assist the police to fish out other suspects.

However, the four suspect denied directly participating in the destruction and looting of the police station, but they agreed that they helped some suspects that stole the facility to keep some of the stolen goods.


One of the suspects, John Ime, a 28 years old member of a vigilance group in the area was accused of aiding a suspect that stole money from a dead policeman’s pocket to escape.

He, however, denied the allegation as he claimed that the suspect escaped when he went to take his bath.

Another suspect, 42 years old Sunday claimed that he saw the television he was accused of looting from the police station at the fence and took it home, before police came to his house to arrest him.

Mr Ibe, another suspect said the sound speaker he was accused of stealing was found in his tenant’s poultry cage.

But he claimed that when the Police came to the house, they did not meet the tenant and he was arrested.

Mr Ibe claimed that the police said as the landlord of the house, he should produce the owner of the poultry.

Also, 46 years old Chima who claimed that he worked as a security guard was on his way from work when he met people carting away things from the police station and he entered and saw the uniform of a police man, took and kept it in one room in his house.

But he said the police later arrested him over claims that the DPO’s uniform was recovered from his house.

However, after several probing questions from journalists, he later admitted that he stole DPO’s uniform for safe keeping.

Items recovered from the suspects include: s 21 inch television, radio speakers, and the uniforms of the DPO of Afam Police Station .