Heartbreaking! Female Patient Raped By Hospital Worker While On Admission In Indian 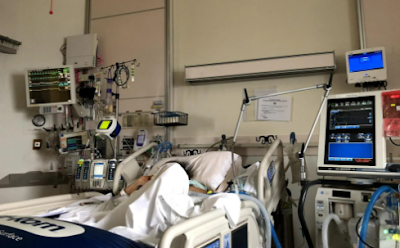 A female patient was allegedly r,a,ped by a hospital worker while undergoing treatment for tuberculosis (TB) in India, police said.

The 21-year-old woman had been admitted to Fortis Hospital in India's northern city of Gurugram, and was allegedly assaulted while in a semi-conscious condition on a ventilator.

The patient later gained consciousness and told her father what had happened through a handwritten note, police added.

Police said that they have identified the suspect but have so far been unable to arrest him.


The victim is still undergoing treatment at hospital, where police said the family suspected the incident to have taken place between when she was admitted on October 21 and when she gained consciousness October 27.

The woman's father questioned how a male staff member was left alone attending to his daughter. 'My daughter was r.a.p.ed while being in hospital [sic]. This is a breach of patient security and safety,' the father told reporters.

According to the police, the woman - from Mahendragarh - was taken to hospital after she complained of breathing issues and was undergoing treatment for TB in isolation in a private room on the ICU, when the alleged assault took place.

'The hospital conducted an investigation internally and we were informed by the family members (about the alleged crime), following which we have registered a case under section 376 (2) (E) of Indian Penal Code at Sushant Lok police station. We have identified the suspect but are yet to arrest him,' she said.

The police have also received CCTV footage and have questioned staff working on the ward in their investigation.

'It was found that the suspect is outsourced and is non-medical staff. We are verifying all the details before arresting the suspect,' she said.

Police added that the victim is currently unfit to record a victim statement because she was put on a ventilator the day after telling her father about the alleged r.a.p.e.