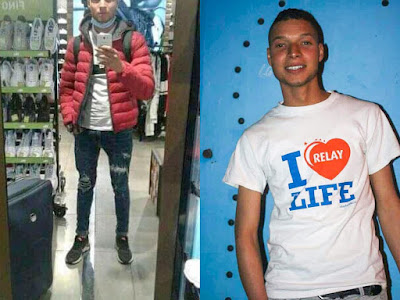 Dressed to kill, this is Nice knifeman Brahim Aouissaoui just hours before he launched his vicious attack on worshippers at the Notre Dame Cathedral, beheading one of his victims.

The 21-year-old migrant sent this selfie picture to friends back in Tunisia to show off his new clothes, bought with money working illegally in Europe.

The image was taken at a shop in France the day before he walked into the church in the centre of Nice armed with two knives and intent on murder.

And he was wearing the same clothes – a red puffa jacket, white t-shirt, distressed blue jeans and trainers – when he was shot by armed police who brought his murderous attack to an end.


The photos is one of a series of pictures that Aouissaoui sent to friends and relatives in Tunisia chronicling his journey across the Mediterranean Sea, through Italy and to France.

The killer is pictured wearing a white t-shirt claiming to 'love life' outside his family's humble home near Sfax and in a cabin of the Italian quarantine ship where he spent 14 days after arriving in Europe on a migrant ship.

However the Islamist extremist gave no hint that he planned to carry out his deadly assault on innocent Christian worshippers, his family and friends said.

His older brother Yassin, 38, said: 'He bought new clothes and a mobile phone in France with the money he had earned working harvesting olives in Italy.

'He was very proud of his new clothes and wanted to show us he was doing well.

'Brahim said he wanted to go to Europe to earn money to buy a car.'

He added: 'He made a lot of phone calls the night before the attack. He called us, the family and his friends. He spent hours on the phone reassuring us that everything was fine. He said he had met an Arab man who was helping him to get on his feet in France.'

Struggling to make ends meet, Brahim Aouissaoui, is the eighth of ten children who grew up in the dusty streets on the outskirts of Sfax, an industrial town on the coast.

He could not find regular employment but worked as a bicycle mechanic and in an olive press before turning his hand to selling contraband untaxed petrol to passing motorists.

On 25 September he boarded an illegal migrant boat to the Italian island of Lampedusa – one of tens of thousands of poverty-stricken Africans who make the dangerous crossing into Europe every year.

It comes as it emerged that Aouissaoui spent up to two days in the city plotting his murderous attack at the city's Notre Dame cathedral.

Anti-terrorist police made two further arrests in and around the port city on Saturday, bringing the total number of Islamist suspects in custody to four.