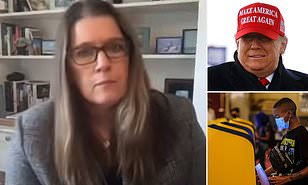 Mary Trump has warned that if her uncle, President Donald Trump – who she called 'vile' is reelected on Tuesday, the U.S. could be at risk of becoming an 'authoritarian state.'

According to a 'panel of experts' the president's niece said she put together last week, 'The message is... Donald has [apparently] done everything in his power to dismantle every institution that comprises the U.S.'

'We're looking at an authoritarian state if we allow him to continue unimpeded,' she told MSNBC's Joy Reid during an interview on 'AM Joy' Sunday morning.

Mary also told The New Yorker in an interview published as part of a report Sunday that if Trump is defeated, he and his associates will spend the weeks between now and inauguration 'breaking as much stuff on the way out as they can—he'll steal as much of the taxpayers' money as he can.'


'As if my blood pressure weren't high enough,' Mary told Reid in her television interview. 'He is vile. He is actively calling on American citizens to commit violence against other American citizens simply for voicing their opinions.'

'This is so dangerous,' she added. 'He is doing the same thing with his armed supporters to go watch the polls. And we know which neighborhoods he's sending these people to. So, it can't be clearer what he is doing. Please understand that he will allow violence to be committed in his name in order to take this election because he knows he can't win it legitimately.'