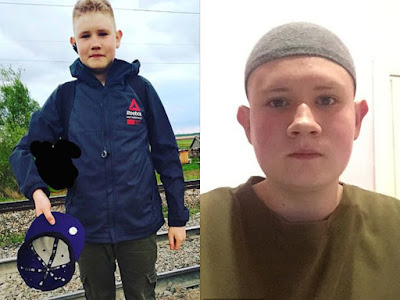 A knifeman shouting 'Allahu Akbar' was shot dead by police after stabbing an officer and trying to set fire to a police station in a Muslim-majority region of Russia.

The 16-year-old was armed with a knife and a Molotov cocktail and inflicted multiple wounds on a police officer before being shot dead in Kukmor.

In a chilling video before the attack, Antipov told how he intended to destroy a cafe which he saw as sinful and 'devilish'.


It is unclear why he instead targeted a police station.

Filmed as he walked in darkness to the scene, the 16 year old - whose mother is reportedly a devout Muslim - said: 'May the peace, mercy, and blessings of Allah be with you.

'I'm now going, to blow up... or I mean to burn a cafe, where they… listen to music… A club where they sell alcohol... Such a vile, devilish place. Inshallah, it will be destroyed.'

The video was revealed by BAZA media which said it was withholding the full footage because it included calls to attack police.

Russia's Investigative Committee said it was treating the incident as an attempted act of terrorism and had opened a criminal case.

Russian news agency Interfax said the teenager had shouted 'Allahu Akbar' and called police 'infidels' during his assault in the region of Tatarstan.

Investigators said the teenager had tried to set fire to a district police building and stabbed the police officer while being arrested.

He is said to have screamed 'I am going to kill you all' as he stabbed an officer three times in the hip and arm.

Another police officer had fired warning shots into the air before being forced to open fire, officials said, saying the teenager had died of his wounds before medics could arrive on the scene.

Investigators have opened a case into an 'attempted terrorist act' and 'encroachment on the life of a law enforcement officer', the committee said.

Antipov was reported to be from the Altai region in Siberia and had a job working in a halal cafe named Barakat.

Its owner Marat Zamaleev had served 14 years for sabotage and the Illegal manufacture of weapons.