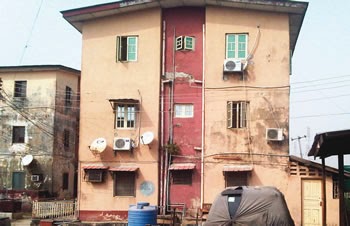 The Lagos State Police Command has
arrested 22-year-old Oluwaropo Tifase, for
allegedly killing his father, Moses Tifase, in the
Mile 2 area of the state. It was learnt that
Oluwaropo, who is the fifth child and only
son of the family, had had clashes with his
parents in the past over financial issues.

According to the police, Oluwaropo, a
suspected cultist, was rusticated from a
university in Ondo State, a few years ago for
some cult-related offences.
It was gathered that 75-year-old Moses, a
retired mechanical engineer, was stabbed to
death in the neck with a pair of scissors.

The Tifases, who hail from Imesi Ile, Osun
State, were living in an apartment in Block
285, Jakande Estate, Mile 2, Lagos.

It was learnt that Oluwaropo allegedly
sneaked into his fatherâ€™s bedroom to carry
out the act on December 6.
In her statement to the police, Oluwaropoâ€™s
mother, Funmilayo, said the family and
neighbours discovered Moses lying dead in a
pool of blood.

The 65-year-old added that Oluwaropo had
violent tendencies as he once manhandled
her during an argument.
She said, â€œOluwaropo is our last child and
son. He has four sisters. He and his
immediate elder sister stay with us in the
house. The elderly ones have got married
and left. He usually slept in my room. On the
evening before that incident, I told him to go
and lock our door. He did that and we all
slept.

â€œBut when I woke up at dawn, I discovered
he was no longer in my room. When I came
to the sitting room, I did not find him either.

After a while, I heard footsteps in the
passage, and it was him. He was shocked to
find me in the sitting room. I asked him
where he was coming from; he said he heard
some strange footsteps and went to check
who it was, but he found nothing.

â€œThe mistake I made was that I did not check
his fatherâ€™s room at that time. It was in the
morning that we discovered that Moses had
been killed in his room, and surprisingly, our
house was not broken into.â€
Our correspondent learnt that the neighbours
reported the incident at the Festac Police
Division. The police arrested the three family
members â€“Funmilayo, Oluwaropo and his
sisterâ€“ for questioning.
Punch Metro gathered that preliminary police
investigations showed that Moses was killed
by his son â”€ Oluwaropo. However, it was
learnt that the suspect had yet to confess to
the crime.