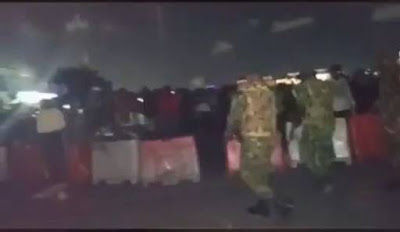 The Lagos State Judicial Panel of Inquiry probing the shooting of #EndSARS protesters at the Lekki tollgate on the night of October 20, 2020 has summoned the army to appear before it, Sunday Punch has learnt.

But the army has indicated not to honour any summons or invitation by the panel, except it is from the state government.

The seven-man panel, which began sitting on Monday, is also saddled with the task of probing allegations of brutality by men of the now disbanded Special Anti-Robbery Squad.

A member of the retired Justice Doris Okuwobi-led panel, set up by the Lagos State Government, confided in Sunday Punch that the panel had already dispatched an invitation letter to concerned authorities.


“We have summoned several authorities, including the military,” the panel member, who spoke on condition of anonymity, said.

On whether the panel had fixed a date for the appearance of the army, the member said, “No date yet. But surely, we are summoning the military, police and everybody relevant to our probe. We have no limitation as to who we are going to summon. We want to get to the root of the case. The panel had agreed that a letter be dispatched to the military authorities.”

But when Sunday Punch reached out to the Nigerian Army over the invitation sent to it by the panel on the need for it to state its story regarding the incident, the acting Deputy Director, Army Public Relations and 81 Division’s spokesperson, Major Osoba Olaniyi, said it was not the duty of the judicial panel to invite the Army to answer questions regarding the reported shooting of unarmed protesters at the Lekki toll plaza.

Olaniyi stressed that the army intervened in the Lekki tollgate incident based on a request from the Lagos State Government and that it would only appear before the panel based on same directive from the state government.

He said, “If we receive a letter from the state, we will go. Are we not under civil authorities? Are we not part of Nigerians? Have you forgotten that we did not go there (Lekki tollgate) on our own?

“It is not the duty of the members of the panel to tell us that. If the state wants the (81) Division to come, they will write and we will oblige. See, if they have written to the division, it is our duty to go. It is not for them to go through the media as if we are scared of coming.

“It is the state government that constituted that panel of inquiry. So if anybody needs to get in touch with us to come, it is still the state and not members of the panel.”

Tom w 12:45 Sun, 01 Nov 2020
whoah tis blog is great i love studying your articles.
Stay up the great work! You understand, a lot of individuals aree searching around ffor this info,
you could help thjem greatly.
مكالمة wevsite الربح والخسارة