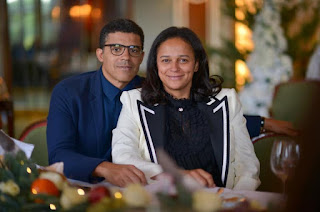 Sindika Dokolo, the Congolese businessman and art collector husband of Angolan billionaire Isabel dos Santos, has died in a diving accident in Dubai, a colleague and two family members said on Friday.

They said the exact cause of the 48-year-old’s death on Thursday was not clear.

Dokolo and dos Santos, the daughter of Jose Eduardo dos Santos who ruled Angola for 38 years until 2017, faced corruption charges, including allegations that they steered $1 billion in state funds to companies in which they held stakes during her father’s presidency.

Dokolo and Isabel dos Santos have both denied wrongdoing.

A colleague and friend of Dokolo, Cedric Mala, confirmed his death on Friday. Isabel dos Santos has not commented, but on Thursday posted a photo of her and Dokolo on Twitter.

“I am shocked and devastated by the death of my brother, friend and collaborator Sindika Dokolo,” Mala told Reuters.