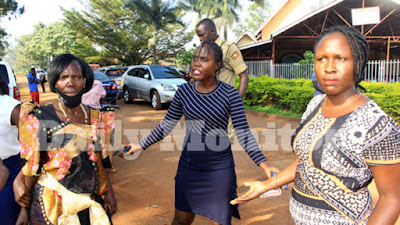 There was drama at Our Lady of Fatima in Jinja City after a woman who separated from her husband 30 years ago stormed the church service to block his plans of marrying another woman.

Ms Mary Baseka Norah, 58, stormed the Sunday morning service demanding the church leaders to halt the marriage banns and other wedding preparations for her husband, Mr Martin Tibalira with whom she has two children.

Flanked by her daughters, Ms Baseka interrupted the marriage banns saying she could not allow her husband to take on another woman (Ms Proscovia Nabirye) as his wife because they are still legally married.

However, as she was still explaining, police was called to intervene before she was hounded out of the church and ordered to leave the premises.


Her daughters faulted police officers for unfair treatment of their mother whom they said was seeking justice in a peaceful manner.

“Why are you chasing our mother from the church? What has she done? She has come to pray. Is it because Mr Tibalira has paid you? It isn’t right at all,” One of the daughters shouted.

A copy of the marriage certificate seen by this reporter show that Ms Baseka and Mr Tibalira, a prominent businessman in Jinja City got married on March 28, 1981. However, they separated in 1985 over Mr Tibalira’s promiscuous actions.

“I am here to stop my husband from marrying another woman because we are still legally married. However, I’m surprised to see police hounding me from the church yet I would think they are supposed to protect me. To the best of my knowledge, church rules provide that Tibalira is not allowed to marry another woman unless we are divorced,” Ms Baseka said.

Ms Baseka said she had first sought the intervention of the church leaders but they ignored her, prompting her to attend today’s church service and make her concerns known during the banns.

“When I went to the church leaders, they paid me a deaf ear. They said they would continue with the wedding plans. I thought they were joking until I heard his name being mentioned during marriage banns,” she said.