Two Women Insert Batteries In Their Victim’s Genitals, Seal Her Womanhood With Superglue 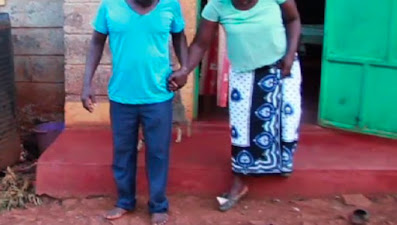 Police in Kandara, Murang’a County, Kenya have launched a hunt for two women who abducted and mutilated their victim’s genitals in late September 2020.

The victim, a 32-year-old resident of Gitura Village in Kandara, says she suspects her female neighbour, whom she has been having differences with for two years now, hired the women to torture her.

The victim told K24 Digital that her neighbour had advised her to leave her (victim’s) husband following unending marital dispute.

“Every time she (neighbour) would return home and find me in my house, she would tell me: ‘you are still here? I thought you have already left him’.

She developed hatred towards me after I told her that I was not going to leave my husband as she (neighbour) had advised,” the victim, a mother of three, said.

“Since that day, she has never spoken to me. On several occasions, she has incited her children to abuse mine. When I confronted her mid this year, she vowed to teach me a lesson, saying: ‘wewe, utajua siku moja (you will regret one day),” said the mother-of-three.

On September 26, 2020, the victim was stopped on her way home by people who were in a saloon car, pretending they wanted to buy land in the victim’s neighbourhood.

“They asked me the price range for different sizes of land in Kenol Town. I told them I did not know, but they could come another day when I would have already gathered enough information. It was during that brief conversation that one of the car occupants came out and sprayed a chemical substance in my eyes. They, thereafter, bundled me into the car and took me to an abandoned house, where they tortured me.” The incident happened at 6pm when the victim was returning home from buying milk in the neighbourhood.

The victim said while semi-conscious, she saw two women injecting her with an unknown substance and, thereafter, inserting two battery cells in her genitals before sealing her womanhood with superglue.

The victim was, thereafter, dumped on the Kagia-Kariguini Road, a few meters from her home.

“I couldn’t answer a short call of nature for a few days, prompting me to visit the hospital, where a surgical operation was performed on me,” said the mother-of-three.

After being discharged from the Maragua Sub-County Hospital, the victim filed a report at Kabati Police Station.

So far, no suspect has been arrested in connection with the incident.

Kandara Sub-County OCPD, Isaac Thuranira, confirmed the incident to K24 Digital, saying the case is being handled by DCI officers in the area.

The victim alleges that her neighbour, whom she suspects organised the attack, has been threatening to harm her if she doesn’t withdraw the matter.