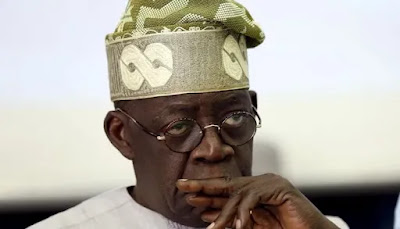 Nigerians demanding the end to police brutality and bad governance in line with the #EndSARS tagline storm the London residence of APC National Leader, Bola Ahmed Tinubu on Saturday.

According to the video posted by African Independent Television, only a few of them carried placards with many chanting derogatory words as they stormed Tinubu’s residence at Duchess Mews, Portland Place.

This is coming after the APC leader was accused of ordering security forces to open fire on #EndSARS protesters at the Lekki tollgate area of Lagos State – a claim he has denied.

Tinubu responded by stating he will never be part of any carnage.


“Why will they use live bullets?

The former Lagos state governor also denied having any investment in the Lekki Concession Company, the firm which manages the tollgate.

He said: “I have no dime, no kobo investment in the tollgate.”

Tinubu had also “appealed to the youths” and Governor Babajide Sanwo-Olu to respond to the demands of the protesters.

“That was why he (Sanwo-Olu) set up the Judicial Commission of Inquiry. The governor has gone to the home of one of the victims to appeal to them.

“He has put N200m together as part of restitution and compensation for those attacked,” he added.