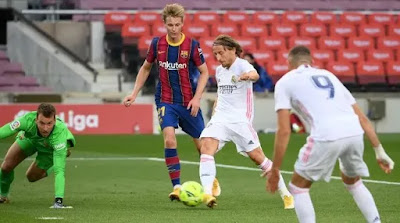 Champions Real Madrid have thrashed Barcelona 3-1 at the Nou Camp to emerge winner of Saturday’s El-clasico.

The win takes Madrid to the top of La Liga table. It was an embarrassing defeat for the Lionel Messi-led Barcelona.

It was a sweet win for Madrid who have lost their last two games at home.


Karim Benzema produced a great pass that found Valverde inside the penalty area, who took advantage of the situation to rifle a shot into the top left corner.

Barcelona responded swiftly to make it 1-1 through Anssumane Fati on eight minutes, who found himself some space inside the box to get on the end of a pass from Jordi Alba, then sent the ball into the bottom right corner.

On 61 minutes, Sergio Ramos broke into the box and went over after a challenge from an opposition player, but the referee signaled no penalty, but VAR overruled the referee’s decision and awarded a penalty to Madrid.

Ramos won the battle of wills and sent an unstoppable penalty past Neto into the bottom left corner.

On 70 minutes, a sweeping move ended with a pass to Jordi Alba inside the box. He let fly towards the right side of the goal, but Thibaut Courtois was watching it all the way and made a comfortable save.

Madrid made it 3-1 on 90 minutes through Luka Modric, who made a great solo run and pulled the trigger from inside the box, beating Neto with a strike under the crossbar.

It was a great win for Madrid, who had 15 shots attempt on goal, with nine of such shots hitting target, with four off target and two blocked by the keeper.