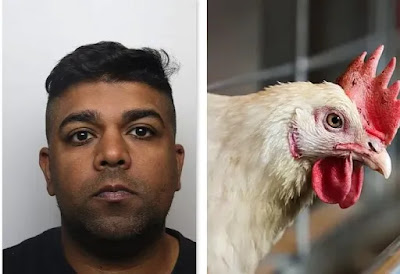 A care worker, also a s.e.xual pervert r.a.p.e.d chickens to death in the basement of his Bradford home in UK and his wife watched and video-taped all as the depraved acts unfolded.

Bradford Crown Court has now jailed the man, Rehan Baig three years, but spared the wife, who aided and abetted his depravity.

Baig was jailed after the court heard that the horrifying footage of Rehan Baig abusing the birds, which were family pets, was saved under the file name ‘family vids’ and were shot by his wife Haleema.

The couple had a GoPro camera rigged up in the cellar of their home to capture the footage of both of them indulging in the ‘depraved and perverted’ acts.


The court heard that Haleema Baig joined her husband in the videos and that he at one stage alternated between having intercourse with his wife and the chickens.

The brown and white chickens died as a result of 37-year-old Baig’s s.e.xual activity with them, the court heard.

In jailing him, the court told Baig his behaviour had been ‘depraved, despicable and perverted’ and ‘would make any right thinking member of society sick to their stomach.’

Haleem Baig, 38, admitted aiding and abetting her husband’s sick actions but she was spared jail after a judge heard there was evidence that she had suffered domestic abuse at Baig’s hands.

The offences came to light after a raid on the couple’s home in Great Horton, Bradford, West Yorkshire, on July 9 last year by the National Crime Agency who were acting on intelligence that Baig had images of s.e.xual abuse of children.

Two computer towers, a laptop and a mobile phone were seized and examined and images and videos of child abuse – 11 in the most serious category A – were recovered.

However investigators found more than they bargained for when they realised the sickening acts on the chickens and a dog captured in some of the footage featured Baig himself.

Prosecutor Abigail Langford told the court: ‘Moving images were found of the defendant engaging in penetrative sexual intercourse with a number of chickens.

‘Haleema Baig was depicted in some of these videos. Having viewed them it is clear they are filmed in the cellar or basement of their property and both are clearly depicted in the videos.

‘Rehan Baig is seen naked from the waist down and Haleema Baig is seen to perform a s.e xual act on him. He penetrates the chicken while she is standing close by.

‘There are other examples where Haleema Baig engages in penetrative s.e xual activity herself with the defendant while he moves between penetrating the chickens and her.

‘She is heard to make s.e.xually encouraging moans to the defendant and engages in consensual s.e.xual activity with him. These do help with her culpability in these particular acts.’

Ms Langford said still images were also found of the couple involved in s.e.x.ual activity with a dog, which has not been found or identified and was not believed to be their own pet.

Reham Baig encouraged the animal into s.e.x.u.a.l acts with himself and his wife. She added that the chicken abuse had not taken place on only one occasion.

She said: ‘There were numerous different chickens, brown and white birds and the defendant appears to be wearing different clothing, it is the Crown’s case that this was repeated behaviour.’

She said the chickens died in the course of the shocking abuse at the hands of Rehan Baig.