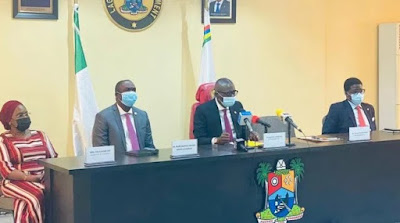 Members of the panel were sworn-in on Monday at the State House, Marina, Lagos.

The panel is to investigate cases of brutality and human rights violations committed by operatives of the dissolved Special Anti-Robbery Squad, SARS, in the State.

The panel, which is headed by retired Justice Doris Okuwobi, will sit for six months and is mandated to thoroughly investigate all verifiable claims of abuses and fatalities arising from SARS engagement in the State, with the objective to bring erring officers to justice and get compensation for the victims.


The governor, while swearing in the members of the panel said in the last two weeks, the state had witnessed the justified protests of youths against police brutality, saying that the pain of the young ones had been felt in various parts of the State and country as well as in the diaspora.

“They have spoken in one voice against the unbridled violation of their rights and lives by the disbanded Special Anti-Robbery Squad. Through the #EndSARS protests, Nigerians from all walks of life have spoken loud and clear on the need for government at all levels to take immediate and concrete actions to secure the lives of innocent Nigerians, especially the youth – many of whom have suffered gross violation of their fundamental human rights.

“Some have even lost their lives under questionable circumstances. In one of my engagements with the protesters, they gave me a list of five immediate demands, which I personally presented to President Muhammadu Buhari in Abuja last Tuesday.

“I must, however, state that even before my visit to Mr. President, I had taken action on some of their demands, which included the immediate release of all those detained on account of their participation in the #ENDSARS protests and the establishment of a N200 million fund for compensation to families and individuals who were victimized by officers of the disbanded SARS,” he said.