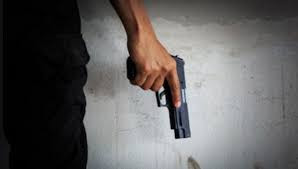 A middle-aged policeman from Busia County, Kenya was shot dead on Friday night  by his fellow cop in unclear circumstances.

Police Constable Francis Kalewa was shot in the right side of his back, and the bullet exited through the chest.

The incident happened at Bukesa Village in Burumba Location, Busia County a few minutes to 10pm.

At 9:40pm, village elder Pamela Atieno had reported to a local police station that residents were on the verge of lynching a 26-year-old man accused of stealing motorcycle parts from boda boda operators in the neighbourhood.


Constables Kalewa and Wycliffe Kibet Kaptila and corporal John Kipkemoi Kenduiwo rushed to the scene to rescue the suspect identified as Samson Peter.

As the three cops were bundling Peter into a waiting police vehicle, the irate residents began stoning the policemen with the intention of grabbing the suspect from their custody.

“The officers were forced to fire in the air to scare the rowdy mob,” says a police report filed at the Busia Police Station on Friday night under the OB Number 91/16/10/2020.

“As they (police officers) were approaching the station, it was noted that Constable Francis Kalewa was bleeding. He was taken to the Busia County Referral Hospital, where it was established that Kalewa had sustained a gunshot [injury] in the right side of his back,” adds the report.

Kalewa, however, succumbed to his injuries while receiving treatment Friday night, police say.

Busia Sub-County Criminal Investigation Officer (SCIO) has taken up the matter, and a probe into the circumstances leading to Kalewa’s fatal shooting launched.