Falz, Others Back Out Of Town Hall Meeting With FG Over Police Brutality 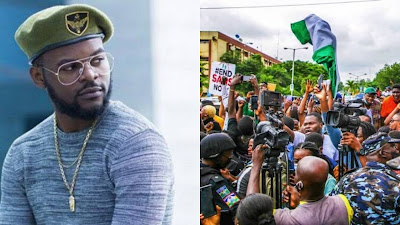 As the agitation against police brutality, extortion, harassment and extrajudicial killing of Nigerians continues, hip-hop rapper Folarin Falana known as Falz and public policy expert Dr Joe Abah has backed out of a town hall meeting set up by the government.

The town hall meeting, organised by the Ministry of Youth and Sports, was to discuss and recommend solutions to the country’s policy system and a reform of the Nigeria Police Force.

“I will not be on this panel,” Falz tweeted on Friday. “I was given false information. Plus there is no need for all this, please!! The agenda is clear #5for5 #SARSMUSTEND.”

Abah announced his withdrawal from the visual event after Falz said he would no longer participate.


“Following Falz’s withdrawal from this event and the absence of more youth voices, I will regrettably no longer be moderating this event,” Abah tweeted.

He explained that he “was only ever meant to be the moderator. Nothing else. I suggest that the format for the event be changed to hear more youth voices.

“Engagement is important. The Town Hall meeting provides an opportunity for the youth to speak directly with the IGP and the Minister of Youth. I would encourage as many people as can make it to take the opportunity.”

The inspector general of police Mohammed Adamu, Falz, Segun Awosanya and Ife Durosimi-Etti were scheduled as panellists while Dr Abah was expected to moderate the online meeting.

Durosimi-Etti later announced her withdrawal from the town hall meeting.

“Please note that while I was honoured to receive this invite, I will not be part of this panel. The demands of the Nigerian youth are clear and remain consistent,” Durosimi-Etti said.

The town hall meeting is not the first by the government since the nationwide protest broke out last week. The inspector general of police Adamu already met with Afropop artistes Davido and Naira Marley over the demonstrations.

It is unknown if the meeting will go as scheduled by the government as they aim to persuade thousands of protesters in different parts of Nigeria to leave the streets.

Although the government promised to act on demands of the protesters but they say they will continue with the protests until they begin to see actions.