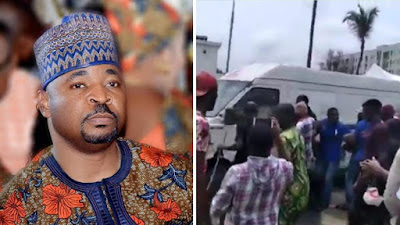 #EndSARS protesters at the Lagos State House of Assembly today rejected food and soft drinks sent by the Chairman of the National Union of the Road Transport Workers in the state, Musiliu Akinsanya aka MC Oluomo.

The rejection was in reaction to an attack unleashed on the protesters by thugs at Ikeja, on wednesday and thursday.

MC Oluomo was accused to have been the sponsor of the violent attack but he has denied the allegation.


In an apparent attempt to endear himself to the protesters, the NURTW boss sent food as well as soft drinks and water branded with his name to the youths.

The refreshments were conveyed in a white van to the Alausa area on Friday afternoon.

Some protesters, oblivious of the sender, collected the items and drank the drinks and water before one of them raised the alarm that the packs were branded with ‘Donated by MC Oluomo’.

The awareness angered the protesters who pelted the van with empty plastic bottles, alleging that the NURTW boss had sent them “poison”.

The driver of the van zoomed off immediately.

For over a week, youths across the state who joined their counterparts from different parts of the country, have been demanding a total overhaul of the Nigeria Police Force and an end to extrajudicial killings by men of the defunct Special Anti-Robbery Squad.

The protests have intensified despite the disbandment of the unit and the announcement of the Special Weapons and Tactics to replace it.