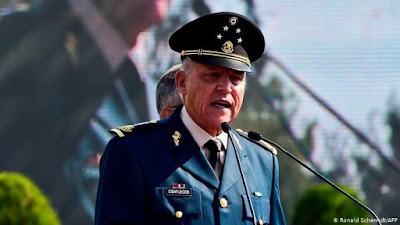 Mexico’s former Defence Minister Salvador Cienfuegos was arrested Thursday in the United States, reportedly at the request of the US Drug Enforcement Administration, in connection with a corruption investigation.

Cienfuegos, who was defence chief from 2012 to 2018, was said to have been on a trip with his family when he was detained at Los Angeles airport.

“The consul in Los Angeles will inform me of the charges in the next few hours. We will offer the consular assistance to which he is entitled,” Mexican Foreign Minister Marcelo Ebrard said on Twitter.

The Mexican investigative magazine Proceso, quoting unnamed sources at the US Department of Justice, reported that the arrest was the result of a long-standing investigation named “Operation Godfather” into corruption involving drug traffickers.


It said other senior military officials had also come under investigation when US authorities began to collect evidence against drug lord Joaquin “El Chapo” Guzman, who is serving a life sentence in the US.