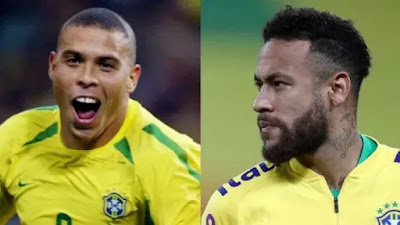 The Paris Saint-Germain star put away a penalty in either half of their World Cup qualifier in Lima before tapping home from close range in injury-time, Goal reports.

Neymar, 28, moved onto 64 goals in 103 games for Brazil, pulling past the great Ronaldo in second place on the nation’s all-time goalscoring list.

Ronaldo scored 62 goals in 98 games for Brazil in a 17-year career for his nation that included winning two World Cups, two Copa Americas and a Confederations Cup.


Only Pele, who netted 77 times, has scored more goals for Brazil than Neymar.

Legendary Brazilian goalkeeper Taffarel believes Neymar is a ‘superstar, who could lead the nation back to the promised land of winning their sixth World Cup title.

And the 54-year-old feels Neymar would have won FIFA’s The Best award if PSG saluted in the recent Champions League final against Bayern.

“[Neymar is] a great player,” Taffarel told the official FIFA website. “He plays the game in a beautiful way. He’s an incredible dribbler, sets up goals, scores fantastic goals.

“He’s very important for us. We really hope he can be at his best and help Brazil win another World Cup. He’s a superstar.

“I cheered a lot for Paris [in the Champions League final] because of the Brazilians who play there. I really wanted Neymar to win this Champions League and, consequently, The Best FIFA [Men’s Player] award.

“But it’s just one day. I really hope in the future he can win this award and be considered the best player in the world.”