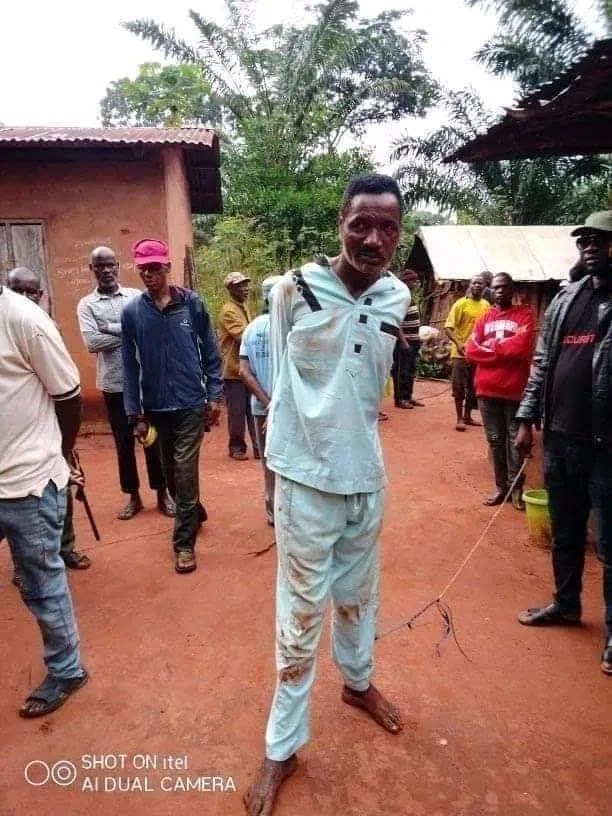 It was an unusual weekend at Mkporogwu, Iheakpu Awka, in Igbo-Eze South Local Government Area of Enugu State as a 45-year-old man, identified as Michael Ugwuanyi, on Saturday, smashed his parents’ heads with pestle over a yet-to-be-identified matter.

It was gathered that one of the deceased and the mother of the suspect, Florence Ugwuanyi, was pounding cassava meal in the kitchen on the rainy Saturday evening when the suspect snatched the pestle from her and smashed her head.

According to the Chief Adviser on Security Matters in the community and a member of the monarch’s cabinet, Titus Ugwuoke, the suspect, sensing that his father, late Julius Ugwuanyi, would retaliate or alert the neighbourhood about his crime, seized the same pestle and also smashed his head.


Ugwuoke also said that he covered his victims’ heads with clothes and took his deceased mother’s handset to alert his relations, alleging that they ate cooked beans and were reacting to it. On hearing the development, Ugwuoke added that the deceased’s’ first son, Pius Ugwuanyi, reached him on phone at about 4 am on Sunday morning and pleaded that he should rush to their father’s house to ascertain what was amiss and administer treatment on his parents since his wife is a practising nurse.

On getting to the family of the victims with his wife, Ugwuoke said they met the suspect who informed them that his parents have gone to the hospital for treatment, adding that they angrily returned home, adding that when the first son called again, he told him that the suspect informed him to return home from Abuja immediately because their parents’ health were in critical condition.

On hearing this, Ugwuoke said, he returned to the family and conducted a thorough search in their rooms but could not find anything. He also said “I decided to arrest him with the Neighbourhood Watch personnel since he refused to disclose the name of the hospital where his parents went for treatment. It was in the midst of this apprehension and confusion that Daniel, who is a younger brother to the late Julius, went to the kitchen axis and raised the alarm.

On rushing there, we discovered the lifeless bodies of the suspect’s parents covered with clothes. I uncovered the clothes and what I saw was beyond my explanation, it was gory, to say the least. Their brain cells were splashed on the floor.”

Confirming the incident, the Spokesperson of the Enugu State Police Command, Daniel Ndukwe said: “The suspect, Michael Ugwuanyi, has been arrested and the Commissioner of Police has directed that the case be transferred to State Criminal Investigation Department for further investigation and prosecution.”