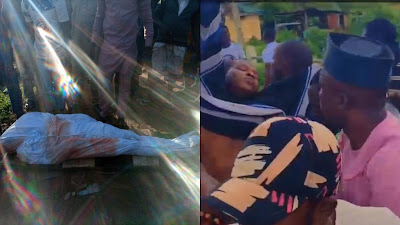 A young Nigerian, Jimoh Isiaq was shot in Ogbomosho during an #EndSars protest on Saturday and later died from the resulting injuries, Oyo State Governor, Seyi Makinde has confirmed.

The Governor also said seven others sustained injuries during the protest and have been taken to the hospital for treatment.

Eyewitnesses said Isiaq was standing along the road when he was shot by the Nigerian police.


The Oyo State police command, in a statement on Saturday, denied that they were involved in shooting at protesters.

“I have received with deep sadness the news of the passing of one of our children, Jimoh Isiaka, who was shot during the ENDSARS protest in Ogbomoso,” Makinde said on Saturday. “He later died at Bowen University Teaching Hospital, Ogbomoso, earlier today.

“Also, at this same protest, Abdulrasaq Olawale, Oluwadamilare Gbolohunmi, and five other persons sustained injuries and were taken to hospital for treatment.

“This situation is highly regrettable. I have contacted the Commissioner of Police, Oyo State, Nwachukwu Enwonwu, and other relevant agencies, and investigations into what led to the unfortunate incident are still ongoing.”

Many Nigerians have taken to the streets in recent days to call for the scrapping of the Special Anti-Robbery Squad, an infamous police unit notorious for hounding and harassing innocent civilians.

The Inspector-General of Police, Mohammed Adamu, has announced a ban on routine patrols for SARS officials among other measures.

President Muhammadu Buhari has also said he is committed to ensuring the police are responsible to the people.

But critics say the Federal Government’s response is mere rhetoric and protests have continued.