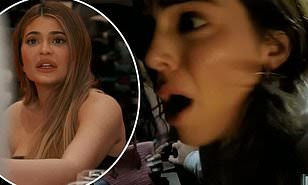 Kylie and Kendall Jenner got into a serious physical fight, causing Kim Kardashian to call security on Thursday's episode of Keeping Up With the Kardashians.

Kendall, 24, accused Kylie, 23, of 'putting her heel in her neck' during the brawl, leading the sisters to vow to 'never speak to one another again.'

Kim, 39, could be heard shouting: 'It's an emergency! Go get Kendall!' as she listened to her sisters brawling in another vehicle, played over 41-year-old Kourtney's phone.

The row happened because Kendall was upset that Kylie took her outfit during the family getaway in Palm Springs, California.

'We have to go get Kendall!' Kim told her driver, taking command. 'Turn around, sir!'

'That's cause you f***ing slapped me!' Kylie yelled back.

In a confessional, Khloé recalled, 'We're just hearing high-pitched screaming. We can't even figure out what's happening, and it just sounds really crazy.'

When Kim's car stopped, a producer ran up and told her, 'They left in the other car.'

'We need to find them,' said a worried looking Kourtney.

Kendall suddenly crawled into their car, swearing, 'I will never speak to Kylie again, ever.'

The fight was a horrifying moment for the whole family, not least Kris Jenner, 64, who had just been grappling with seeing Kim, Kourtney and Khloé fight in a recent KUWTK episode.

At a KKW Beauty shoot, she told Kim and Khloé that it had been hard to watch her girls argue so vehemently at their age, and she called Kourtney to offer her support.

'Thank you,' Kourtney replied, crying. 'I'm fine now. It's just… it was like everyone was ganging up on me for like two f***ing years.'

'It's just such a natural thing in our family,' she told her mother. 'If someone goes any way against what everyone else is doing, it just seems like they just attack.'